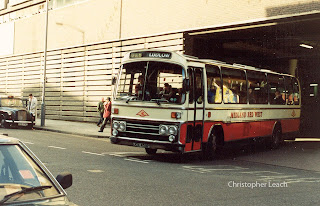 In the NBC era Midland Red had to take new Nationals instead of double-deckers but maybe as compensation it was able to order plenty of  the popular Leyland Leopard which were ideal for it's longer services. The later ones all had coach bodies and 459 still looked smart in later Midland Red West livery as it exited the Bull Ring Bus Station bound for Ludlow on the long X92.
Posted by christopher at 08:40