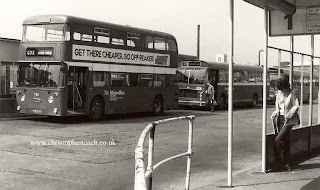 A quiet moment in the Eighties at Wakefield Bus Station with typical NBC bus types in the background. Before it sold out, during the Sixties Leyland Atlanteans and Panthers had been popular with West Riding but today it is best remembered for operating by far the largest fleet of ill-fated Guy Wulfrunian double-deckers. Under NBC control Bristol RE's came first followed of course by the ubiquitous Leyland National whilst the Northern Counties Daimler Fleetline 725 BHL625K was rather more traditional. As the buses were operating in the West Yorkshire PTE area they carried MetroBus logo and no doubt ran to their conditions and fares.

Posted by christopher at 14:54