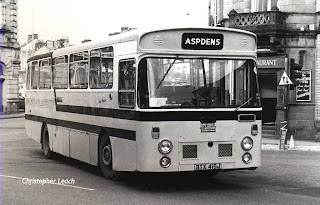 Concerns like Massey Brothers, Northern Counties and East Lancs didn't always get many orders for single-deckers so often alterations and modifications came about quicker than the orders thus enabling us to have a good idea of where a bus came from even after it had been sold like this East Lancs bodied Leopaed which had been new to Bedwas and Machin but which had moved to Blackburn where the body had been built and now at work with Aspden.
Posted by christopher at 05:51