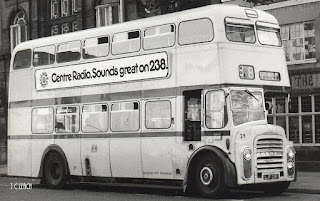 Leicester split the bodywork order on it's final batch of twenty trusty Leyland PD3 buses between Metro-Cammell and East Lancs. Both looked smart in the Leicester cream and maroon livery but the MCW buses like No.29 were not as attractive and the bodywork had a more functional 'add a bit on feel' whereas the East-Lancs buses looked more harmonious like it had been designed individually. Orion's as they were called rattled a bit, many enthusiasts loathed them but many Metro-Cammell and sister Weymann bodies had long lives, those on the early Atlantean being a good example and Leicester had three of those as well but like many Municipals who flirted with rear-engined deckers stuck with proper tried buses as long as they could.
Posted by christopher at 14:08