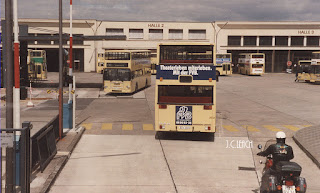 The BVG bus garage at Britz was opened in 1963 and when this was taken held about 220 buses 190 of which were double-deckers. Somewhat brutal in character it seems to bestow on us the same no-nonsense feel as the buses in their 'uniform' creamy colours once found all over both East and West Germany. This view was taken in the Eighties and there was no litter to be seen or bits of old buses and oil drums. They parked withdrawn buses around the back so maybe any rubbish was stacked there but on the whole I think this was a 'tight well run ship'. Interesting name Britz sounds a bit like a cross between a blond Swedish film star and a salty cheese biscuit but when there those German words always tempted me into thinking of words to remember them by or just to make me smile.
Posted by christopher at 03:09