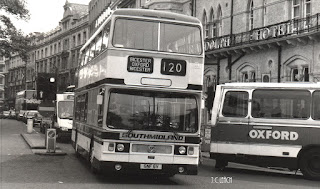 From a practical point of view the way they split some of the NBC companies made no sense at all and a good example was City of Oxford which was divided into two. In a way it was a bit like a poached egg where Oxford retained the rich nutritious yoke at the centre and South Midland gained the thin unappetizing egg-white  country area. In the old days cross-subsidy kept the rural route network afloat but all South Midland could do was to invade the city and try to poach some revenue if it wanted to prosper. But at the end of the day all the government wanted to do was sell everything off and these valuable assets often got sold off to former managers and the like for peanuts. Once the odd garage in a prime position had been sold for almost more than had been paid for the whole company to build another Tesco there was money in the coffers to buy the next company and do the trick again. I am not sure if I really like the South Midland jazzy pale yellowy-green and black livery but it was certainly a lot more striking than Oxford which took a long time to rid itself of that Poppy Red. However even though the destination display looked a bit ameteurish on this former Greater Manchester Leyland Titan B15 looked rather clean and smart .
Posted by christopher at 06:10

...and behind the South Midland Titan in it's very eighties garish dayglow green stripes is a Thames Transit minibus, one of Harry Blundred's finest breadvans.

TT was, if I remember correctly, originally intended to compete with (read: destroy) City of Oxford but instead started to spread out into the countryside and drastically weakened South Midland, which ended up selling out to Thames Transit not long before the whole Transit Holdings group was sold to Stagecoach.

They just pulled the NBC apart and let the crows come and pick at it, and when there was only bone and gristle left greedy First Group came along and gobbled it up hardly worrying if it was viable lol. Even on it's own with Oxford at it's heart COMS would have struggled.