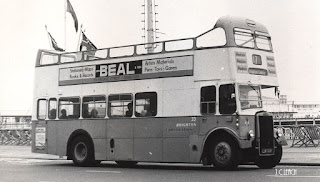 Very much a feature of Brighton was it's open top buses, this MCW bodied PD3 was delivered new as as believe it or not an OPO bus. But after it was converted I imagine with most people getting on and off at the same points these duties were less demanding with regard to driver neck-ache on sea-front duties. Still I'm sure they must have been popular with the public at least and No.33 LUF 133F might have been pictured in 1979 but all four were still with Brighton in 1985.
Posted by christopher at 02:11