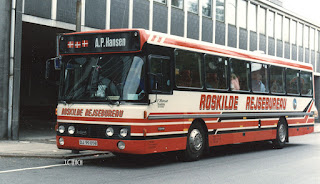 If you travel to train to Copenhagen the last major town before you arrive is Roskilde famous for it's Viking connections and museum and is situated just on the border of  their equivalent of the capital's  PTE. But as well as yellow HT buses there were town network 'by-buses' and even red DSB railway buses. But the most notable operator was Hansen who operated routes to villages like Jyllinge beside the fjord and of course it did excursions of which this then quite new DAB Leyland was acting as an advertisement in a bold presentation here in August 1989. I'm surprised nobody has picked up on my Danish bus photos yet for as in places like Britain and Portugal the bus scene has changed beyond recognition since I was there in the Eighties.
Posted by christopher at 14:10

I rather like the Danish flags on the number blinds. :-)

I know nothing about the Danish bus industry (beyond what you've written in your captions), as I expect is true of most of your readers; somehow Denmark never really seems to feature in the UK bus press and perhaps it's also off the radar of most UK enthusiasts.

As for me, the only time I've ever been to Denmark was a very short but unsuccessful visit to Copenhagen (which should have been a day trip, but we only lasted a couple of hours) with a Swedish girlfriend who became an ex-girlfriend within a few weeks of that trip.

I'd love to go back and visit Copenhagen and also the rest of Denmark, but my very limited European travels are currently mostly restricted to Germany...

Yes Denmark is beautiful in nice warm weather but it can be cold and grim in Winter. A bit expensive too but not as bad as the other Scandinavian countries especially booze. The Danes like other small countries are very patriotic and they are not afraid to put up the flag. I was lucky to have a Danish girlfriend but I'm afraid she's frail old and difficult these days and of course there are no no more DABs so I haven't been back.