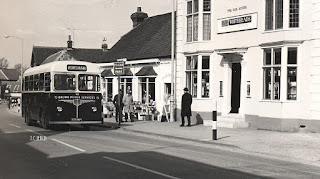 The South.East corner of Britain seemed to unable to boast that many well known independents compared with other parts of the country. But of course there were a few quite well known ones even if not household names even amongst enthusiasts. One of the more interesting was Brown Motor Services which could be seen in Horsham like this Willowbrook bodied Albion Nimbus. Based at Forest Green in Surrey they only had three buses, one being a rare Rare Leyland Comet. Despite the name the livery was maroon and cream. Horsham was one of those interesting towns right on the border where various major bus companies met, and as well as Southdown the principal operator with a decent sized garage here, one could also see green London Transport buses and Aldershot and District.
Posted by christopher at 03:32