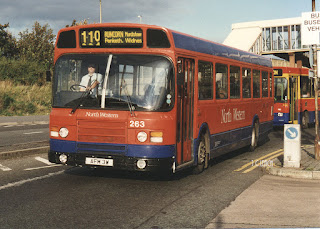 I was never much of a fan of the original Leyland National especially in those rather drab NBC colours but I had quite a soft spot for the later Mark2 with it's more pleasing sounds and more of 'a bus feel'. Crosville had some including this example for the Runcorn Busway, but by the time the firm had been renamed North Western these by now quite elderly buses like this were doing more normal duties like this well patronised run to Warrington.
Posted by christopher at 03:16