Trial Buses in Liverpool Including Olympian 0064 A316 GLV 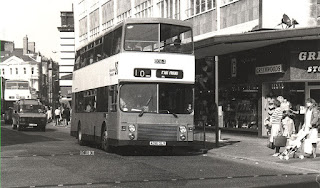 Merseyside PTE like it's forerunner Liverpool Corporation was a keen user of the Leyland Atlantean but of course eventually it had to go out of production. The PTA was obviously undecided what to buy next so simultaneously  they bought a whole variety of trial  double-decker buses in small batches from Leyland, Dennis, MCW and Volvo. It was a bit of a waste of time as the days of the PTE's were already numbered with Deregulation in the offing. I always liked the Alexander R-Type body  as seen on Leyland Olympian 0064 but  as well as these five they had  another ten X-Reg buses with ECW bodies.
Posted by christopher at 02:07