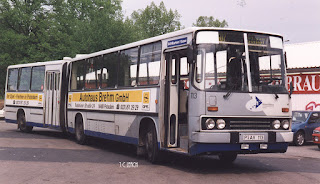 So typical of the Eastern Block counties was the ubiquitous Hungarian built Ikarus bendi-bus. Very unsophisticated for both the operator and passenger they were got rid of as soon as the Iron Curtain countries opened up following Devolution in Germany. However once painted out of that orange colour into a more personable livery they seemed to become much less like a work horse and icon of a repressive Communist regime and now almost seemed quite friendly. I just wished I had ridden on a few more as they had a distinctive sound like this one with Havelbus based in the Brandenburg city of Potsdam just outsie Berlin..
Posted by christopher at 13:28

I think they lasted a bit longer in Hungary. You still see working examples there on occasion.

Are yes but Hungary is in the old Eastern Block not part of prosperous Germany.