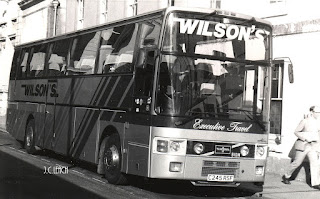 We all have differing tastes as to what looks smart and I rather liked this Van-Hool bodied Volvo B10M of Wilson's. I don't know which one despite te Scottish reg. but I'm rather partical to silver based liveries and I've a feeling the other colour was raspberry red. I've just looked it up and it was one of the biggest coach firms in Scotland based at Carnwath, Strathclyde. More recently with over forty vehicles (1986)  In 1963 Robert Wilson had just three coaches, a Commer, a Bedford and an Albion.
Posted by christopher at 03:59