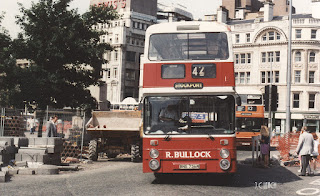 From a frontal view alone one would never be able to guess whether this former Greater Manchester Northern Counties bodied bus negotiating the building work at Piccadilly for the tramway was one of it's vast fleet of Atlanteans or a slightly less numerous Fleetline. As it turned out like most of the Manchester Independents who had a go following Deregulation Bullocks went for the Daimler Fleetline so I knew already. But they were in good company as Mayne and Walls liked them too. Following former 7420 was GM 7916 an Atlantean with a Park Royal body and easy to recognise against the crisp angled NC bodied buses as it had a more rounded front dome
Posted by christopher at 08:18