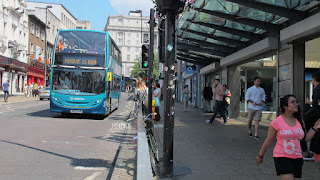 Once central  Liverpool was almost exclusively worked by double-decker buses but over the years this has eroded to where they had become the obvious minority on the streets. But in recent years their numbers have increased again but I still have to turn around to take a second look. An Arriva Alexander-Dennis Enviro seen in Liverpool in 2016.
Posted by christopher at 15:38