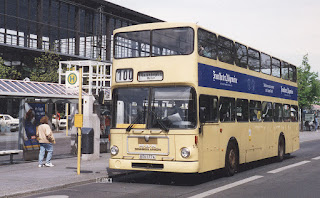 Before Reunification and the fall of The Berlin Wall the premier route in The West used to be the very frequent 19 which traversed the Kurfurstendamm and which also offered shoppers a cheap hop-on-hop-off cheap fare. But symbolic of the new order was the 100 which crossed the old divide bringing together the old city centre destinations like Alexander Platz and Unter den Linden in the East with the Reichstag and Bahnhof  Zoo in the West. Being a top tourist route usually mostly newer buses could be found on here but when it was busy it also saw the oldest and I enjoyed a ride on one of these MAN buses when only a couple were left in service, but like once familiar landmarks I miss them as fellow MAN 1774 of 1981 was so very typical of the fleet between the mid Seventies and early Nineties.
Posted by christopher at 14:49