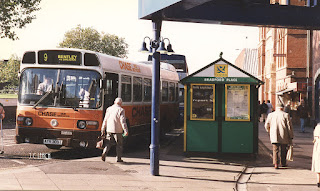 One of the interesting things about Deregulation was the number of Independents that sprung up with quite a strong sense of identity which included vehicle choice. Chase Bus Services was one of the last strongholds of the National B Series and Mark1  running a sizeable fleet at the time when they were starting to get rare. This example came from London Buses and was seen in the old Walsall Bus Station. Other distinctive local Independents became a final refuge for other equally smartly turned out endangered vehicles such as Warstone's Green Bus which had over the years operated a wide variety of old Leylands, everything from Leyland PD3's and Tiger Cubs to Atlanteans. And whilst on the subject of the Atlantean not too far from Walsall North Birmingham ran a smart fleet of NC bodied Manchester Standards. These operators were the survivors and once they had been bought out the bus scene seemed very dull as the major operators had finally got rid of the competition. Ironic really as that was the opposite to what Deregulation was supposed to do but I'm afraid politicians are not paid to think things through.
Posted by christopher at 16:16

Politicians do to tend to forget, as do the civil serpents in the "Competition Commission" that while competition is the natural scheme of things, isn't actually the natural end result.

The end result of pure competition as practiced in nature is that one "thing" (animal, plant, business) out-competes the rest and is the sole survivor as the rest die off - and the same rule applies in business.

Competition is simply a stage on the way to monopoly...

In reality I think as long as it went into private hands the Tories weren't really that bothered what the eventual outcome might be.