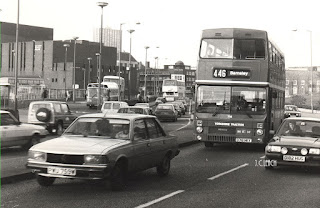 The MCW Metrobus was very common and gave Leyland a good run for it's money. But a low height Metrobus was something quite different as I think they only built one small batch of complete vehicles for Yorkshire Traction, I guess they were hoping to steal some of those large NBC orders as even if there were no low bridges the low height of the Leyland Olympian made it less prone to tree damage etc. It materialised just as the NBC was being sold off and for a time new bus orders dried up so it did not come along at a good time. No.716 was just leaving Leeds for Barnsley when still quite new.
Posted by christopher at 00:30