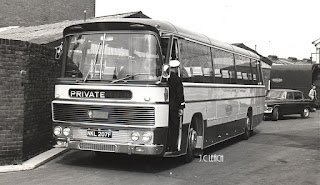 As it is the first day of 2018 I thought I would find an image of a brand new bus. I was a student at Maidstone Art School between Summer 1967 and 1968 which was an interesting time as new Maidstone and District vehicles included the final batch of NC bodied Daimler Fleetlines, and the rest were Leylands for some Stratchens bodied Panthers arrived and these Duple bodied Leyland Leopard coaches. Indeed this one was the first to be delivered at Knightrider Street and the crews were interested to see what it had to offer. As sleek and impressive as it might have looked I'm sure quite a few thought it was not in the same league as the previous coaches which had been elegant Harrington Grenadiers and what's more it wasn't even an AEC. Numbered 4607 my era at Maidstone included the dropping of the rather charming traditional letter based numbering system and this Commander might have been something with a C instead of something to go into something resembling a computer if that's what they were.
Posted by christopher at 05:19

I found it quite a surprise to find these had been purchased considering how conservative M&D's coach purchases had been, how long had it taken for Cavaliers to come to the fleet. Grenadiers were the natural progression as 36' coaches very quickly became the norm. But by the late 60's their favourite coachbuilders (Beadle and Harrington)had ceased production not leaving much choice. Park Royal and Weymann didn't suit, although other BET companies didn't seem to have a problem, and perhaps Plaxton were not considered robust enough for service coaches. The Duple bodies carried M&D livery better than I would have expected.
Best wishes and good health for 2018
Malcolm

Thanks Malcolm and all the best for you too in 2018.