No not Pere UBU, it's Crosville's UBU 72N a Seddon 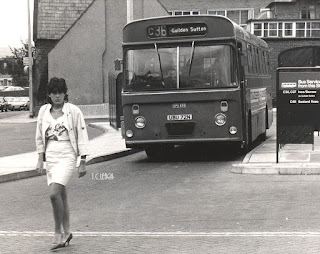 If you don't know who Pere Ubu was he was an outrageous character invented by the writer Alfred Jarry and based on a former schoolmaster, but I suspect many more will know it as a rock band from Cleveland Ohio.

When the NBC sprang into life and  dictated it's standard vehicle policy the Leyland National had yet to materialise and consequently  the in-house state owned Bristol and ECW were hardly in a position to suppy the significantly enlarged fleet now that it was stealing former BET Group orders off AEC, Daimler and Leyland, and its bodybuilders like Alexander and Willowbrook too. I think some would have been glad of the work during this difficult period  but as well as heaven forbid the introduction on a large scale of lightweights from Ford it went to Seddon and ordered one-hundred not very popular Seddon RU's for Crosville. Everything about the NBC was cheap and cheerful and these Gardner powered buses must have looked like a good substitute for the now doomed Bristol RE. As well as the main batch Crosville acquired a former demonstrator which it numbered SPG 699 and allocated to Chester.

Posted by christopher at 07:55

This is actually an underfloor-engined Seddon Pennine VII, one of the few not supplied to the Scottish Bus Group. There were strong rumours that it was provided to Crosville as some form of recompense for the poor performance of the rear engined RUs.

Thanks for that Man of Kent it was something I didn't know. I doubt if it was a great deal of consolation but I see Chester held onto it.