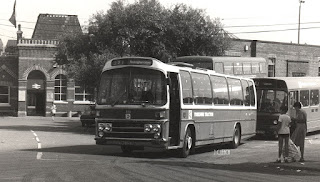 In the new order of Leyland Nationals, Bristol VR's and even Fords, at least the NBC adopted the trusty Leyland Leopard as it's standard coach chassis and no doubt Yorkshire Traction like a number of former BET operators was pleased about this as they had always been keen buyers of the type. As well as all-white coaches YTC was one of a number of operators who had Plaxton Supreme bodied examples with bus grant doors in a more pleasing red and white livery. No.153 was among later additions to the NBC fold in Barnsley, a National2 and an ECW bodied Leyland Olympian.
Posted by christopher at 16:49