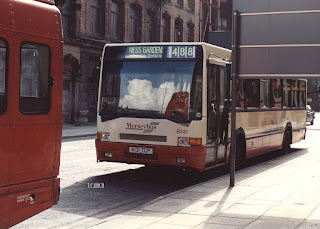 Following the opening up of the Russian controlled Eastern Block the bus builder Ikarus had to both adapt and find new markets as it's state controlled customers dried up. They appeared in Britain too and this Merseybus example was seen in Liverpool on a service from the Wirral. In fact I think as they had an arrangement with DAF to provide chassis they might not have looked beautiful but they became quite a popular choice both in bus and coach form.  Road signs and the like can be a real nuisance when trying to take photos but in this instance it might have blocked out some of the picture but at the same time it blotted out the glare of strong sunlight.
Posted by christopher at 16:19