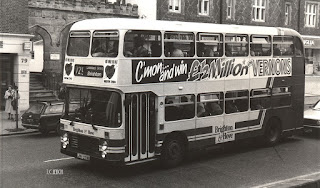 After the break-up of the NBC Southdown was split up and the old pre-NBC Brighton and Hove was reborn. One of the best things was that as well as having a tidy and rather classy script for the fleetname it took on that traditional red and cream livery one which in various shades was found all across the bus industry and did the job well. Of course the new B&H different from the local former Tilling operation in that it took over the old Southdown Brighton routes like this one to Tunbridge Wells.
Posted by christopher at 16:14