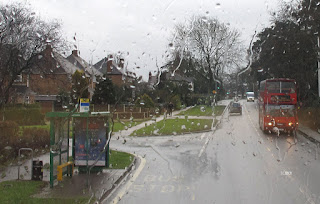 Snow at Christmas in much of Britain is a reality very often and the concept is just another unwanted import from America where they have much colder winters in the north. Generally here it's even bright and sunny or just as likely to be wet and miserable just like in this view from January 2015 as the well known former Stagecoach Leyland Olympian of Select made it's way through Moss Pit on it's way into Stafford.
Posted by christopher at 00:19