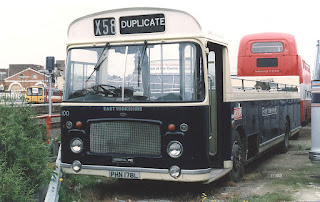 The double deck open-top sightseeing bus is a much more familiar sight than it used to be when it was confined to the sea front. Indeed it can be found on sightseeing duties in any number of cities around the world. However this former United Auto Bristol RE was a very rare example in being of the single-deck variety and with East Yorkshire had recieved the much missed old traditional livery for work in Scarborough.
Posted by christopher at 02:59

Would I be right in guessing you were looking round withdrawn vehicles parked up in the depths of the yard?
It looks like there aren't any tax or licence discs displayed, that's what makes me wonder.

Yes Ross, East Yorkshire kept it's vehicles on the bus and coach park beside the railway across from the station. This one was tucked away right in the corner and I had trouble getting it into my viewfinder but I felt it was one of the best buses I snapped that lovely day.