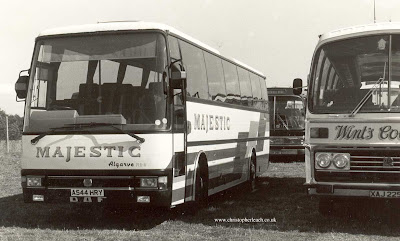 As a percentage Portuguese Caetano bodies are not as numerous as they once were in Britain. They were first imported by the Loughborough dealer Alf Moseley, and were quite a hit as no doubt the first rather over-ornamented style of bodywork appealed to former devotees of another coach-builder the then in 1969 already defunct nearby coachbuilder called Yeates who used over-decoration and lots of Fifties American inspired ugly brightwork to spice up products from the lower end of the market like Bedford, Commer and Ford. By the time the Algarve had arrived on the scene Caetano styling was much more subdued as can be seen on this 1982 DAF of Majestic Coaches of Walsall. Judging from the Leicestershire registration this one came from Moseley's imported stock.
Posted by christopher at 08:44

This is a body from Caetano that I havent't seen before...

But a second and closer look, I can found a design mixture of various Caetano models...

Thank You for sharing !

TR maybe Caetano designed these for the more restrained export market and especially as designs like the Bova were getting sleeker.