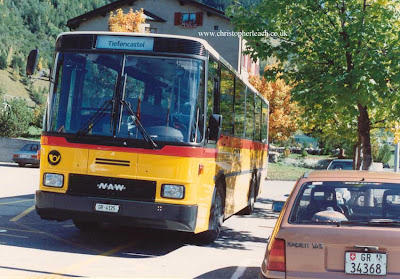 In the actual Post Office (PTT) owned bus fleet there were just over forty of these rather attractive and very Swiss NAW B4-23 buses built to the old restricted standard dimensions for mountain roads at the former Saurer factory by then owned by Mercedes-Benz. Not surprisingly about half of them were allocated to the Regie (Owned) Garages in the Graubunden particularly at Davos, Thusis and Scuol. More unusual was an almost identical Hess bodied example of 1990 found working with a PTT Contractor in the Canton too and I had to look at the manufacturer's plate just to check to see if the still new GR 4125 had already been sold off from the main PTT owned fleet before I had time to tick it off my list as occasionally happened.
Posted by christopher at 11:35