Something to sing about: The Welsh Eisteddfod 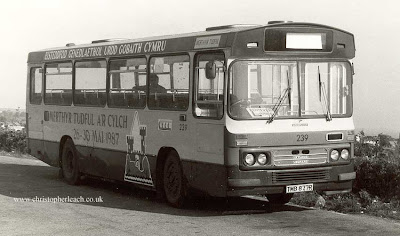 A number of the Municipal fleets in the South Wales Valleys had such a liking for Leyland products they were at various times almost 100% like Merthyr Tydfil with it's half-cab Titans and later Leopards also bodied by East-Lancs.. A second-had aquisition was this short Duple Dominant Leopard which had been Chester No.77 and arriving with not dissimilar brown colours to Merthyr's old traditional maroon livery it looked as though as an economy it had on been partially repainted. Now numbered 239 and advertising the Welsh language Eisteddfod singing competition it is easy for us to see when this view of it was taken as it halted somewhere off it's usual haunts whilst doing a spot of driver training.
Posted by christopher at 14:55