X'mas Eve in Glasgow:: Wouldn't you rather be at the Snooker 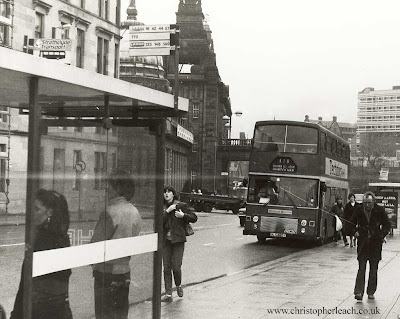 Now that we're coming in to the winter season there is snooker on television again but this time it's coming from a new venue called Kelvin Hall in Glasgow. I was there many years ago in the late Eighties delivering on Christmas Eve or thereabouts and stopped to visit the Art Gallery at Kelvin Hall and to take a few bus views before the 270 mile journey home. Glasgow is not a pretty city at the best of times and it can be very grim on a cold damp December day. The Scottish Bus Group companies had not been included with the formation of the National Bus Company in England and Wales and consequently apart from Glasgow Corporation becoming the Strathclyde PTE there still lots of nicely painted buses wearing their traditional colours. However it would not be too many years before Deregulation would hit the streets here too and as elsewhere in Britain the local bus fleets would gradually become members of the big groups namely Arriva, Stagecoach and First. So okay it might be horrible outside but rather than watching the snooker I would rather be out here beside the venue but back in the past taking pictures of the buses as they were like this Alexander R type bodied MCW Metrobus in it's attractive blue and cream livery. Alexander Midland was to become part of Stagecoach along with Western Scottish but First bagged first prize as it bagged the city's Strathclyde Buses.
Posted by christopher at 09:00