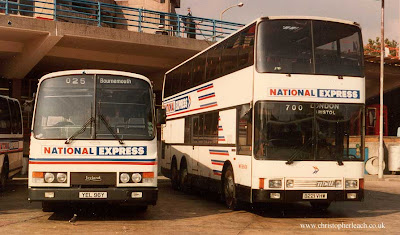 With the advent of the National Bus Company some big well known names disappeared altogether like Crosville and Western Welsh. But as Privatisation approached and large groupings were spun off into more manageable chunks old names of the hardly known reappeared. Both Wessex and Shamrock and Rambler had both been coach firms with little to do with express work except when on hire yet it was still good to see their names around again in the late-Eighties. The three-axle MCW Metroliner was impressive without being too flashy but unfortunately was not a huge success on National Express work. Many were later cut down as open-top tour buses in London for which they were ideal. As for the late ECW coach bodied Leopard it ended up with Midland Red North who had also been bought by S&R's new owner Drawline where in red and yellow it looked most odd alongside the Stafford allocation of poppy-red Leyland Nationals.
Posted by christopher at 04:13