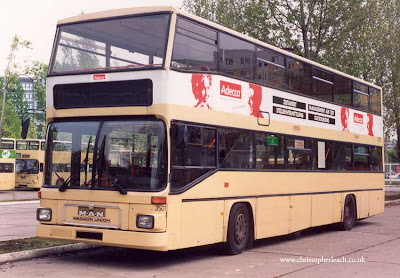 Like the first leaf-fall of Autumn it's always slightly upsetting when we see the first withdrawal of our favourite buses. It's not only for when we remember them as being brand new as a reminder that we too are getting older but before too long as part of our eveyday they will be just a memory. Whilst quite a few of the previous generation were still running about 1984 MAN 3501 in the Berlin BVG fleet might probably have been about first normal withdrawal of this next major type to go as it was one of three pre-droduction prototypes. However I took this view at the old compound at Indria Ghandi Str. about ten years ago and for all I know one or two might hopefully still be hanging on.
Posted by christopher at 03:12