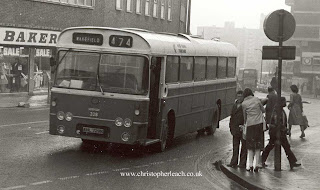 Well not quite as it's a pretty cold and depressing view that might have been helpfully enlivened had the West Riding Plaxton bodied Leyland Leopard had it's headlights on. This style of bodywork was not so common within the NBC but the bus order dates from the time when the 300 vehicle Wakefield operator was still the largest Independent in Britain with it's headquarters at the inappropriately named Belle Isle.
Posted by christopher at 01:15