Trolleybus with a Smiley Face 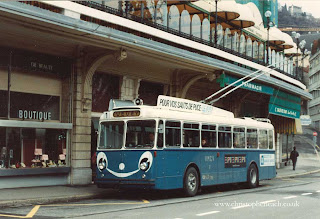 By the time I took this view of VMCV No.7 in 1989 these eighteen Saurer 'solowagen' trolleybuses dating from 1956-8 used on the regular service alongside Lake Geneva were due to be replaced by the same number of new low-floor VanHool/Kiepe vehicles. I remember these well from my schooldays in the Sixties but no longer does Switzerland have that feeling of never changing which was one of it's joys as a transport enthusiast and no doubt should I return many of the later non-Swiss buses would not have enjoyed anything like such long lives before being booted off to Romania. No.7 might have been thirty-years old but it looked ready for another thirty and no doubt would have outlived their high-tech modern replacements too with few problems.
Posted by christopher at 00:40