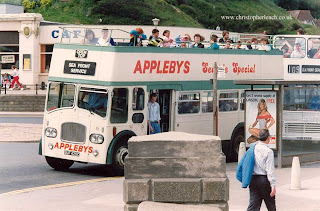 Surprisingly the rather clever idea of buying convertable open-top double-deckers never really caught on, perhaps seaside operators prefered to store the usual elderly more-or-less time expired conversions instead during winter when the workload fell. But examples from the two best known operations from Southdown with it's Queen Mary Leyland PD3's 400-429 of 1963/5 and Devon General's 1961 'Sea Dog' class MCW bodied Atlanteans 925-933  not only gave sterling service but their novalty value and usefullness gave them interesting extended careers as they could be used not just on the coast but for sightseeing in cities, a VIP platform at sporting events like Ascot, a welcome home platform for triumphant footballers or even of course for the manual-gearbox PD3 an operator's tree-lopper cum training vehicle. Strageley enough former Southdown BUF 425C spent some time with Wallace Arnold which included service work in Torquay before taking on a similar roll with Appleby who had a large share of the Scarborough sea-front service. This restrained livery suited these rather elegant buses well and riding on top with the sounds of seagulls and the cackle of the exhaust the 50p fare was money well spent.
Posted by christopher at 05:16