Trying to squeeze one more image out of the film 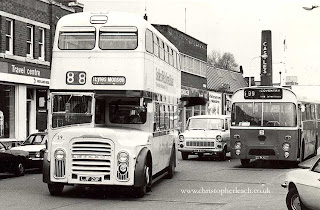 I'm sure we've all tried it an found ourselves with half a negative. On this occasion in Leicester I got lucky as I shot thirty-seven or even thirty-eight. However there was a price to pay as there is a black hole in the picture where I pulled off the film from the cassette as I pulled it along. But I still like it as it's a fine view of one of that city's fine PD3 buses plus another Leyland a marshall bodied Leopard from the other local operator Midland Red. It was 1979 but despite the fine condition of twelve-year old MCW bodied Titan like it's sisters and the BMMO D9 it would sadly only last another year or so.
Posted by christopher at 16:02