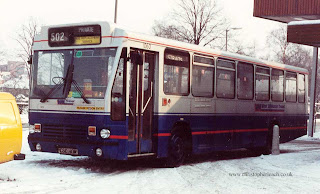 Let this be a warning to you, weekend rail travel in Britain, especially Sunday's is not a good idea in snowy conditions as it helps to make the usual cold carriages, long delays longer and irritatingly slow shuttles more unbearable. Still it gives me something to photograph like this rare visitor from Wolverhampton in Stafford awaiting it's unfortunates. In 1985 West Midlands Travel took five of these rather basic but sturdy looking Alexander P-Series Volvo B10M buses and the same number of the new Leyland Lynx for comparison. As much for political reasons I expect the under-developed poorly constructed Lynx won the day winning a large order but had this Anglo-Swedish ugly duckling been chosen instead it might have turned out to be a nice little nest-egg to carry the newly Privatised former PTA through difficult times. Indeed you could call the two types chalk and cheese.
Posted by christopher at 04:39