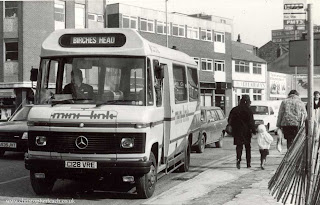 In the Eighties the bus industry didn't really know where it was going. The National Bus Company had been broken up and sold off and with not much money about companies were pensive at what the future might bring. A bit like cracking an egg for an easy rewarding meal operators saw the minibus as a cheap easy way to create a new friendly image and build passenger numbers. Of the minibuses the Mercedes 608 like the Bedford OB of earlier times was a trusted and faithful workhorse that saw it through these hard times as Deregulation signalled the battles and uncertainty ahead. PMT in the Potteries was more ambitious than most and as well as looking at expansion it starting building bodywork in it's workshops on not just smaller vehicles like C128VRE but larger Leyland Swift midi-buses too.
Posted by christopher at 15:55