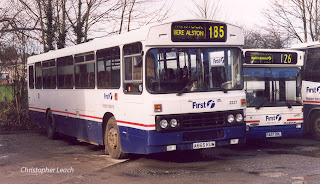 Western National in Tavistock used to have a garage on the same site as the bus station in Plymouth Road, but the First garage is now a yard just outside the town which backs on to the River Tavy. The old allocation used to be about seventeen and as the town has grown the First fleet here mushroomed and must have approached a similar size. However I now suspect it has shrunk again as they have given up most of the rural work as part of the tendering process as nearly everything heads down the busy corridor to Plymouth. It doesn't seem so long ago that the local buses were Bristol VR's, Leyland Olympian and Lynx, plus Tigers and Leopards too along with the usual Dennis Darts. Not common in the First Western National fleet was the Duple Dominant bus body like on Tiger A665KUM which started life with West Yorkshire PTE.
Posted by christopher at 02:57