6 MPT A Stevenson's Favourite of Mine 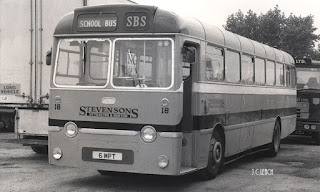 Stevenson's of Spath saw lots of changes in its latter years as it expanded and that included it's image. This included a number of livery styles but this was my favourite, a nice tidy look with neat businesslike lettering none of that modern scribble that looks like it was lifted off a potato crisp package. Yes this looked very businesslike just like the functional but elegantly turned out Plaxton Derwent bodied Leyland Leopard. Oh and it was seen at a location with memories which will warm the heart of many a Stevo driver and you truckers as well the Salt Box Cafe at Hatton..
Posted by christopher at 02:13