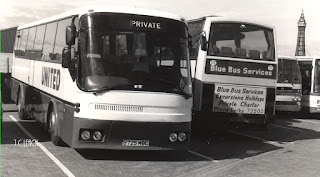 Even in the Nineties during the season Blackpool could be a mecca for interesting coaches like this Bova Futura in United's red and white livery and bearing a Leicester number making it slightly more worthy of attention. But re-registrations were in abundance too adding to the problem and we can see one, a Leopard probably as AEC's were getting scarce which at first glance looks like has an Isle of Man number B423 MAN. I'm glad I stopped spotting when I was a youngster when change moved very gradually and the orderly bus world was well documented.
Posted by christopher at 05:20