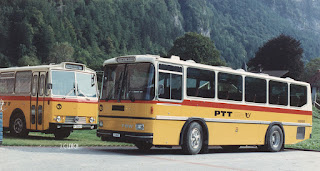 In Britain when we take bus photos at depots the backdrop is usually pretty uninspiring but as one might imagine not always in Switzerland as can be seen here at Meiringen. Two 70's Post Buses were ready to head off up those mountain passes the first a 1973 Saurer DUK with a Tuscher body was bound for Engslenalp whilst the attractive FBW carried the prototype bodies for the later large Saurer RH Class. Hess bodied and of 1978 it was heading for Swarzwaldalp but unlike powerful FBW's of old this batch of twenty-three mountain buses were fitted with under-powered Mercedes OM 401 engines.
Posted by christopher at 08:19