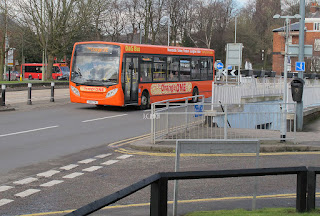 First Bus has retrenched in recent times ridding itself to pay of debt of not just it's more rural networks but some large working class towns too which should be profitable if run properly. It's still in the Potteries another good example but even here in it's diminished empire it has dogged professional competition from D&G which at times seems less like the small Independent. Two of their buses are seen in Newcastle.
Posted by christopher at 00:57