First Manchester: Soup then the Rain 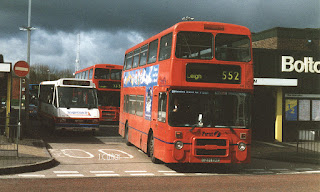 I wasn't keen on all the First pre-Barbi liveries especially this horrid orange and purple which along with his golf clubs one of the managers brought down with them from Strathclyde. But it might have been a good idea to hop on one of these First Manchester NC bodied Leyland Olympians for a trip to Leigh as it looks as if those black rain clouds were hurrying over Bolton on their way to drop their load on Manchester, anyway that's what popular myth had us believe. I expect all that soot and dirt in the air during the Industrial Revolution helped seed the showers on the low ground as they approached the Pennines as it doesn't seem so true today. But even in the Seventies on the Yorkshire side they didn't exactly get away with it either as I remember days when the fog hardly lifted all day in the West Riding and  Calderdale area.
Posted by christopher at 15:17