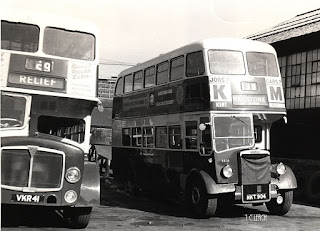 I suppose when coming from my era as bus enthusiasts we emanate from four camps bias and interest-wise, whether it be London Transport, Tilling, or Scottish.With local operators like PMT, Trent and the mighty Midland Red in my home town I am firmly a BET person. But when it comes to picking a favourite that's more difficult as despite family traits each had it's own unique character whether it be the 'rugged' well used Leyland buses of Yorkshire Traction or quirky local 'Dennis' Aldershot and District which was a bit more conservative and more like a Tilling fleet than the others. Lovely Southdown was a bit 'twee' and therefor Maidstone and District must figure as a less obvious favourite along with Ribble. So familiar in various shades of red I was bemused by the rich dark green and cream livery, those number prefix letters and that magnificent emblem, the depot letters they carried on the back plus the numerous garages themselves and often quite small with a good variety of buses. Maidstone had a bit of everything including both highbridge and a pair of low Regents including by then renumbered DL 41 to I think 6741, but PD2's were numerous as were Fleetlines in 1968.
Posted by christopher at 14:35