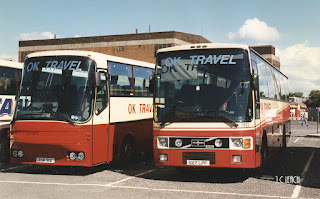 Although I don't recognise the background as such I imagine this one was taken in Blackpool on a sunny day. By this time as can be witnessed by the high 7*** coach series fleet numbers the North East's best known Independent had been taken over by Northern General who by this time called itself Go-Northern if I am correct. Both these coach designs enjoyed success and a long production run, the DAF based Bova Futura and the one that gave the Leyland Leopard a run for it's money the winning combination of a sturdy looking Van Hool body on the Volvo B10M.
Posted by christopher at 11:49