GHA; Beside the shop not only BHS goes bust in Chester 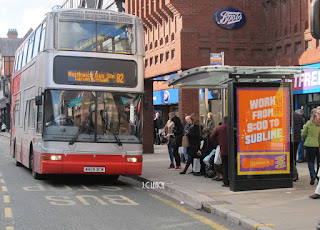 I've heard GHA has gone bust and with a fleet of 200 buses covering parts of the former Crosville empire and even into former Midland Red and North Western territory. The sprawling network of services will take some covering. The trouble with private operators who pick up the bits the big groups won't do, they bigger they get the harder they fall. A similar thing happened to Western Greyhound in the South West. Perhaps the administrator might let them or someone-else run the existing stock as even the likes of Arriva and First don't keep many spare buses these days, a far cry from the Sixties when for example most London Transport garages had a row of dusty delicenced buses but still ready for the road.
Posted by christopher at 15:27

I think that GHA's failure has more in common with Webberbus in Somerset than with Western Greyhound; like Webberbus, GHA just seemed to keep on expanding and expanding, using lots of new(er) vehicles on what looked to be pretty marginal work.
Western Greyhound, on the other hand, suffered first from the "Barton problem" of having to replace their entire fleet in one go (not helped by that fire, of course), which problem was exacerbated by being on fairly marginal territory when it came to earning enough to pay for a new fleet - and then selling out to some rather dodgy characters.

Both GHA and Webberbus seemed to me to have successful core operations but then to be expanding beyond that simply for the sake of expanding, and I sometimes feel that there are managers in the bus industry who aren't happy with small-and-successful and want to be up there with the big boys - whatever the cost. :(

I feel sorry for the staff and customers who've been left in the lurch.

Thanks Ross, there's a lot to be said for doing a little and well. So many long established well respected Independents got carried away with expansion but where are they now, names like OK, Stevensons. However saying that the more sensible approach didn't help Pennine and Fishwick either. I just hope D&G don't go the same way as they give a splendid reliable service passed my house.