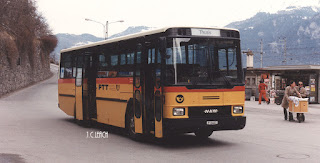 A favourite amongst Post Bus fans were the NAW BH 4-23 buses first introduced in 1985 and which entered service in small numbers till the early Nineties. These had the right feel and were attractive buses but underneath was a Mercedes powered by an OM 427 h a engine. When the German giant took over FBW and Saurer they retained the latter's factory at Arbon to build specialised add-body buses for the Swiss market like this especially as they wanted to build the bodywork themselves retaining local jobs.
Posted by christopher at 01:45