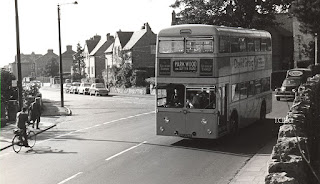 In my old digs, for the year unbelievably having Maidstone's Atlanteans going passed both ways every three and four minutes during the day makes it hardly surprising that I became a big Massey Brothers fan and of these rather conservative  'County Town Corporations'. No the buses were not as classy as the more traditional more rounded bodies found on the Corporation Leyland PD2's which also went chugging passed to and from the garage usually on service but the Atlanteans had a quirky charm and certainly in their early years were very free of annoying rattles unlike even the new buses of today. In those days I would never have guessed that later in their lives they would show up again in my life this time with Stevenson's of Uttoxeter who had about half a dozen of the twenty strong boxy fleet. Very rare buses they were too as apart from one or even two that went to the A1 Group in Ayrshire Colchester was the only other exponent.
Posted by christopher at 02:30