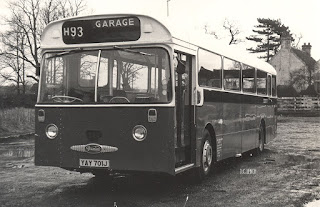 Mid-Warwickshire operated to the south east of Birmingham and a number of it's vehicles could be found on the muddy pot-holed lorry park of the Lincoln Farm Inn Transport Cafe on the A446 inbetween Stonebridge and Warwick near Balsall Common. It operated a number of rear-engined single-deckers which no doubt it bought cheaply due to their poor reputation including AEC Swifts, Leyland Panthers and as seen here a Willowbrook bodied Daimler Roadliner which had been an industry training bus.
Posted by christopher at 15:55