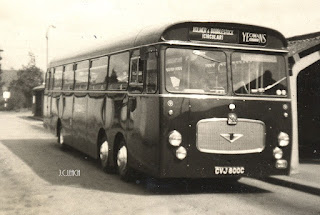 The small city of Hereford being on the south-west flank of the giant Midland Red empire also played host to a number of large companies, indeed Red and White had a small depot here too. On the Independent front as well as Wye Valley was Yeoman's who provided an attractive bottle-green painted mix of interesting old and bought new buses including this quite rare Duple bodied Bedford VAL. A little quirk that lasted many years was the way the company tried to register it's buses with a hundred number. Probably they had a friend who worked in the local road-tax office who helped if they could to find one that was available.
Posted by christopher at 02:15